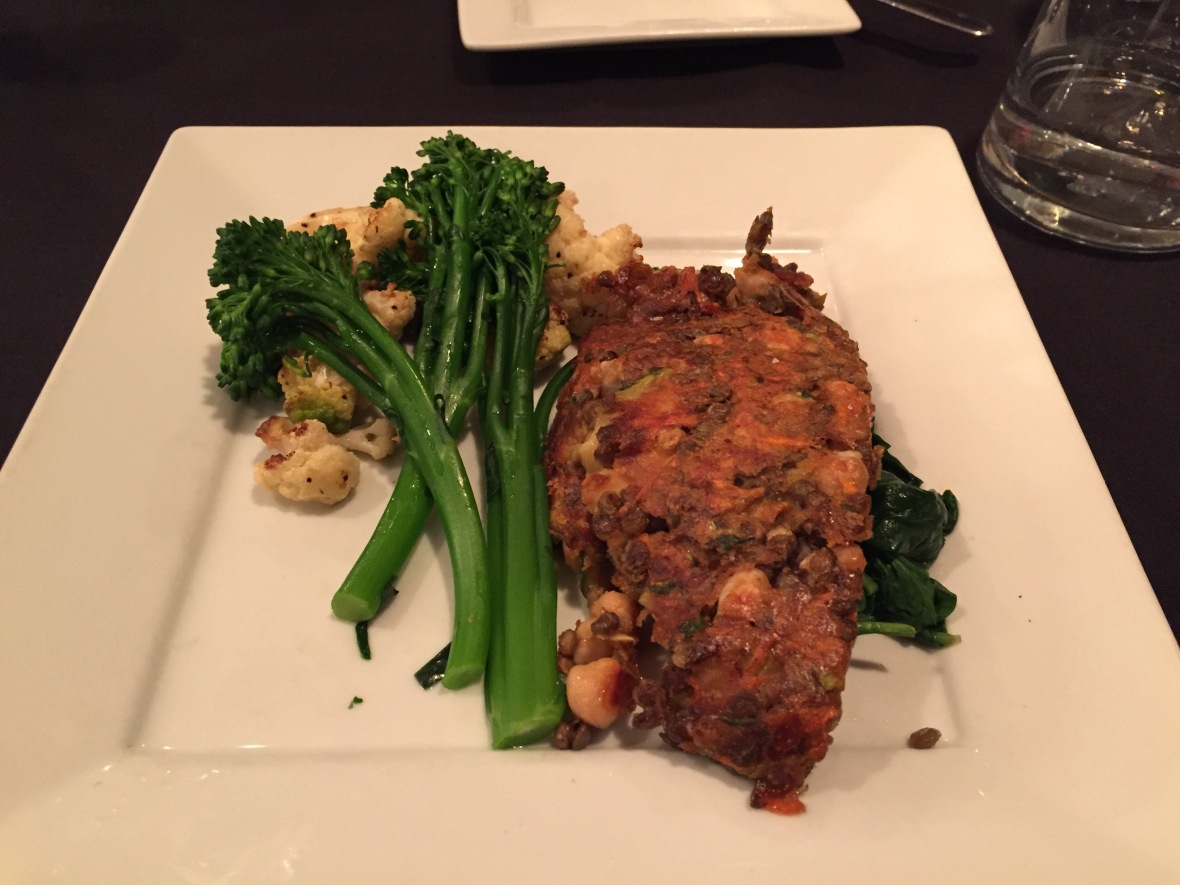 Since I’ll be heading Up North for the holiday weekend, I thought I’d share my favorite gluten-free and vegan restaurants for anyone else making the journey up I-75 in Northern Michigan.
I’ve been traveling to the Boyne City/ Petoskey region of the northern lower peninsula all my life and enjoying its many great eating establishments. If you have never traveled to the area I highly recommend it. Beautiful lakes, biking and hiking in the summer, and skiing, snowboarding and snow-shoeing in the winter.

After being diagnosed with celiac disease, those favorites have changed (no more B.C. Pizza for me). However, I’ve come to find many other great places. Here’s a rundown of my experiences dining in that area.

City Park Grill
City Park is one of the few restaurants that has remained a constant in my pre- and post- celiac journey. This longtime downtown Petoskey stronghold is reminiscent of a speakeasy, and in fact, Ernest Hemingway, who had a home on nearby Walloon Lake, used to frequent the restaurant. It has a very laid-back, family-friendly feel, and consistently serves up quality comfort food.

The reason I continue to love City Park is that the restaurant offers vegan/ vegetarian/ and gluten-free menus. This means I have many options, from a quinoa and vegetable salad to a Mediterranean pasta, that I can choose from. Not only that, but the chefs understand food allergies. They make sure to use separate pans and prepare food for guests with allergies in a separate area. As long as you inform your server, it’s great to know those precautions are in place.

I go back time and time again and am never disappointed.

Chandler’s
Chandler’s is a fine-dining restaurant in the heart of downtown Petoskey that crafts what could be the best dishes in the whole city. They have a very limited, seasonal menu that usually never has a vegan, let alone vegan and gluten-free, dish. But Chandler’s has a secret. If you contact the restaurant beforehand, they can accommodate most dietary restrictions.

In my case, the chef whipped up an amazing creation that may or may not have actually graced the regular menu. It was a stuffed pepper with red quinoa and corn in a tomato sauce surrounded by roast green beans and brussel sprouts. It was hands down the best stuffed pepper I’ve ever had.

Due to its quality, Chandler’s is on the expensive side, but it’s worth it for a special dinner or a vacation splurge.

Twisted Olive
Overlooking Little Traverse Bay, this upscale Mediterranean bistro is a relatively new addition to Petoskey. Its menu changes seasonally, so the options of gluten-free and vegan choices vary. They do have a garbanzo bean and lentil burger (pictured above) that is safe without the bun on the lunch menu year round, though. You can get it for dinner if you contact the restaurant ahead of time.

On Twisted Olive’s current menu, there is a eggplant caponata served over black rice that is both gluten free and vegan. It’s what I’m planning to order when I head up this weekend. The previous winter menu also had a pretty good mushroom bolognese over polenta option that was also safe.

Besides great food, Twisted Olive has great outdoor dining in the summer and will even allow you to bring your dog with you on their patio.

Palette Bistro
Palette Bistro is next door to Twisted Olive, and is similarly newish and modern is cuisine and decor- and also dog-friendly as Rynoa will verify. It’s also owned by the same group that owns City Park and Roast and Toast (see next review). 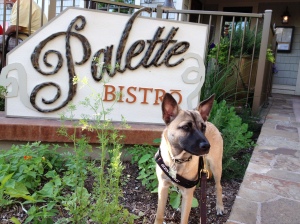 I’ve only eaten once at Palette. They always seem to have a gluten-free and vegan paella on their menu. That’s what I ordered when I was there. Unfortunately, I got sick after eating it so I expect there is some cross-contamination that can happen in the oven they cook it in. If I didn’t like Twisted Olive so much, I might give it another try.

Otherwise, the restaurant is very cute and has above average food for the area. If anyone else has eaten there I’d love to hear about their experiences.

Roast and Toast
This little cafe has been in a Petoskey for as long as I can remember. Roast and Toast offers great soups and sandwiches along with the best coffee and tea in the city.

The soups change daily, but they often have a gluten-free and vegan choice. The soups are self-serve, so it’s one of the few places I’ve risked eating food that is left out because my family likes eating there so much. I’ve never been poisoned thus far, and the soup is delicious. My favorite is a vegetable curry flavor, and I’ve enjoyed a lot of other great ones without having a problem. Trying to get a salad, though, has produced mixed results. Even though the severs will change gloves, I often find bits of other ingredients on them. So for now, I stick with the soup.

Roast and Toast also has more allergy friendly choices like Udi’s cookies and vegan cookies. As of right now, none are both gluten-free and vegan, but it’s nice to know they do try and accommodate people with allergies.

Red Mesa
A cult favorite, and always busy, Red Mesa is really the only good option for gluten-free and vegan eaters in Boyne City. The restaurant is Northern Michigan’s best interpretation of a Latin cantina and serves up giant burritos, sizzling plates of fajitas along with the best margaritas in town.

Like City Park, Red Mesa has a vegan/ vegetarian menu, and a celiac menu. The mushroom fajitas (my longtime love) is the only dish that falls on both menus. It’s marinated in a tequila and lime sauce that is super tasty. They have corn tortillas, and I get mine with stewed black beans and veggies (asked to be cooked in oil not butter). I have gotten poisoned one time there, and as a result, have only gone back once since.

As I said before, Red Mesa gets extremely busy! They also tend to have a younger staff that isn’t the best trained on food allergies. If you want to risk it, or don’t have actual celiac disease and are not as sensitive, you can’t go wrong with Red Mesa.

Barrel Back
Barrel Back wins the award for best view and atmosphere. It’s located overlooking Walloon Lake, and is surrounded by windows to take advantage of the view. In the summer the windows are opened for al fresco dining, and in the winter a large central fireplace warms up the dining room.

I’ve had mixed results at Barrel Back eating, though my family always raves about their food. They mark vegetarian and gluten free choices on their menu, but have very limited options for gluten free and vegan. I end up trying to get them to create me something and have different levels of success depending on the waitstaff, the chefs, and how crowded the restaurant is.

I often  ask for a zoodle dish or get a modified version of their chopped broccoli and quinoa salad. I love the view and the vibe, so I return even though getting a good meal can be a toss up.

Stay turned for a review of my experience dining at Vintage Chophouse inside the Inn at Bay Harbor. Here’s a sneak peak of two dishes I was served when I did a menu tasting there. 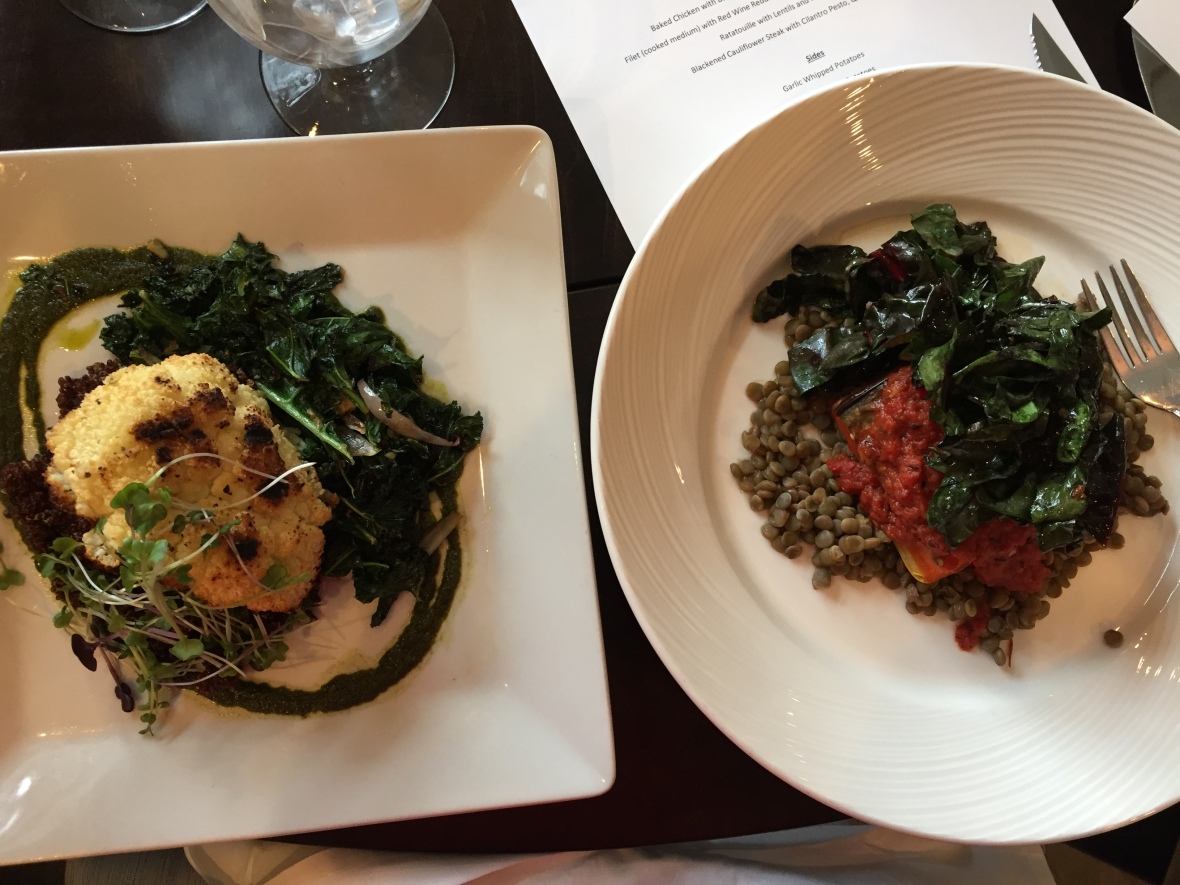