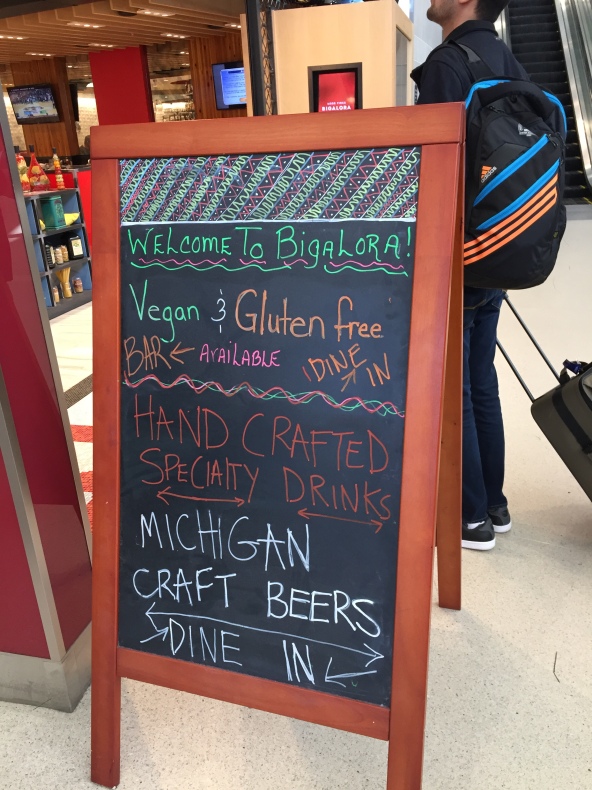 Traveling is never easy when you have food restrictions, and airports with limited food options can be particularly challenging. However, several recently added restaurants to Detroit Metropolitan Airport’s McNamara terminal offer great options for gluten-free and vegan travelers to grab a meal before their flight.

I may be somewhat biased because I call Detroit home, but as far as airports go, Detroit Metro is pretty fantastic. The airport’s McNamara terminal has had its restaurants and stores upgraded in the past few years with exciting new additions. Some of these new places include large nationwide chains, but the airport also put a focus on bringing in Michigan-based brands.

On the restaurant side, PF Chang’s is one of the big chains brought in, while Bigalora Wood Fired Cucina and Mezza Mediterranean Grille are a few of the Michigan-based franchises. The common link between all three of these places? They have multiple gluten-free and vegan items on their menu. And they understand food allergies and how to prepare food safely.

I’ve blogged about PF Chang’s before, as they are pretty well known for catering to gluten allergies. They serve all gluten-free dishes on special plates, which is something you don’t see very often. In terms of gluten free and vegan, the steamed Buddha’s Feast is my go-to. The tofu that comes on it is not gluten-free, but since I have a soy allergy, asking them to leave off the tofu is what I’d do anyway. Because it has the tofu on it, it’s not included on the gluten-free menu, so don’t be worried if you don’t see it there. It’s just steamed veggies! 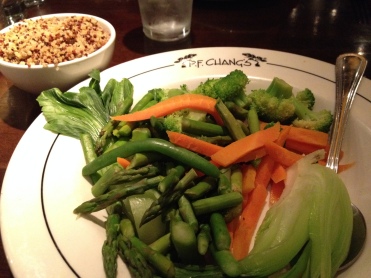 PF Chang’s offers gluten-free brown and white rice. You have to ask specifically for the gluten-free rice, as the typical rice is not gluten free. The only other side that is gluten free and vegan is the GF Wok’d Spinach with Garlic. Since I carry coconut amino packets with me (the perfect soy sauce substitute), I order the Buddha’s Feast with brown rice and top it with the coconut aminos. If you can have soy, they do carry a gluten-free soy-sauce you can use.

The PF Chang’s in Detroit Metro has a prime location. It’s right where you come in from security or walk pass on the way to the baggage claim. I’ve called for take-out when my plane has landed and picked up my food on the way to the retrieve my luggage and it’s worked perfectly. The staff has always been very nice and I’ve never been poisoned from eating there.

I have eaten at the Bigalora location in Royal Oak several times before it moved into the airport. The first time was when I was newly diagnosed with celiac disease and made the mistake of ordering their gluten-free pizza. While the pizza is vegan and very tasty, it’s not safe for people with celiacs because it’s baked in the same oven as their regular pizzas. I did get sick after eating it, but they inform you that cross-contamination is possible. So even though it’s great that they offer a gluten-free pizza that is vegan, it’d be amazing if they had a dedicated oven to cook it in. (It’s a dream I wish for at so many pizza joints.) 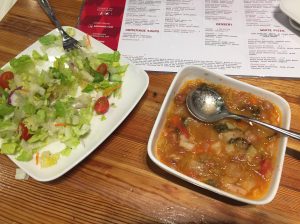 The good news is there’s many other gluten-free and vegan choices besides pizza on Bigalora’s menu. As a bonus, they clearly mark everything that is or how it can be made that way. They have gluten-free pasta and many other veggie appetizers that can be made gluten-free. My go-to is the minestrone soup, which is safe without the pasta and cheese, house salad minus the cheese and croutons, and Crispy Brussels Sprouts without the grana padano. I ask them to cook the brussels in a pan instead of frying them since it’s not a dedicated gluten-free fryer. The minestrone soup is a really nice treat, as gluten-free minestrone is a rare find.

Like PF Chang’s, Bigalora has a prime position at DTW. It’s also located right by where you come down the escalator after security and right before you go down the escalator to baggage claim. I ate at Bigalora on my most recent trip to the airport. My waitress was extremely knowledgable about the menu and how to cater to my food allergies. And my food arrived entirely correct, even with all the modifications, on the first try. It also came very fast, which is awesome since I did have a plane to catch. I will be back!

As previously stated, Mezza is a Michigan-based franchise that has several locations in the Metro Detroit area. I’ve never been to one, but have been meaning to because of the number of items that appear like they can be gluten free and vegan on the menu. The menu includes a variety of specialities from many countries that border the Mediterranean, such as Greece, Turkey, Italy, Spain and the Middle East. 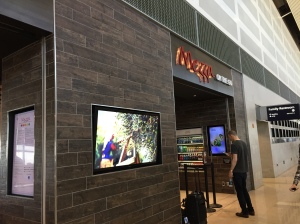 The appetizers offer several potential gluten-free and vegan items: hummus, baba ghannooj, and grapes leaves are a few of them. There also are several salads that can be modified as vegan along with both crushed and whole lentil soup, personal favorites of mine. For entrees, the vegetarian ghallaba is likely safe, although the rice served with it probably is not since it contains vermicelli noodles. You can probably get it served over greens, as I have done at other restaurants, or sub grilled vegetables, the only side that would fit.

While I didn’t dine at Mezza’s Detroit Metro location, I did recently stop by and talk with a manager on the way to my gate. He assured me that they understood food allergies and could safely prepare food for me. He said things like the lentil soup were prepared at a central location so no chance of cross-contamination could occur. He also indicated that they would be willing to work with their available menu items to make me something I could eat. I definitely plan to take him up and try out Mezza. It’s not as centrally located as PF Chang’s and Bigalora, but it’s not far down from them amongst the A gates.