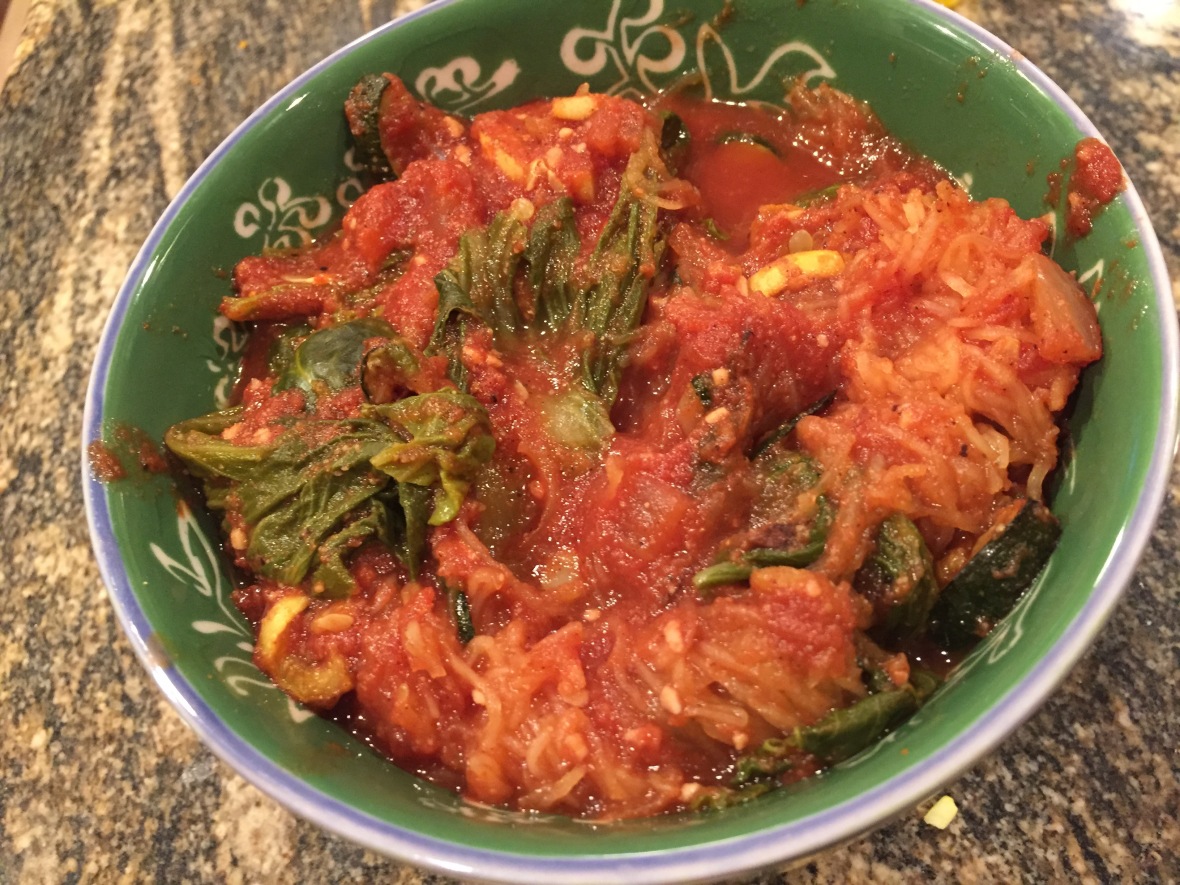 A little spicy, a little sweet, and all delicious. This hearty fall dish has a complex flavor profile thanks to a unique spice blend common in Middle Eastern cuisine.

The inspiration for this spaghetti squash dinner came from a recent trip to Chicago. While there, I ordered a fantastic meal from Kurah called a Banyan Vegetable Kabob with roasted zucchini, eggplant, squash and onion in a zesty tomato sauce. It was traditionally served over rice, but I was craving spaghetti squash and the awesome chef willingly made the substitute. As I ate it, I realized that the zesty tomato sauce tasted like it had cinnamon and cloves in it. Since I got it delivered to the conference I was at, I couldn’t ask the waitstaff what exact spices were in it.

Today I wanted that dish. But since I’m no longer in Chicago, I figured I’d have to try and make it myself. A short Google search later I discovered a Middle Eastern spice blend called Baharat. There are several different regional varieties but the most commonly used ones are pepper, cinnamon, clove, paprika, nutmeg, cumin, and cardamon. I found a recipe for a tomato sauce with that spice blend in it, and then used a Spicely Turkish seasoning blend (which had almost the same spices as a Baharat blend) that I had in my spice rack, in combination with paprika and extra cumin to create my own version of the sauce.

There a lot of steps to make this recipe. And I find spaghetti squash to be a labor of love to make; however, both are definitely worth the effort to make this meal. 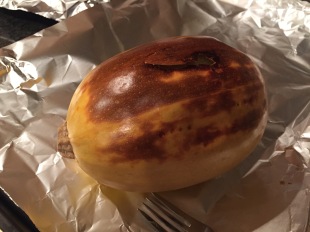 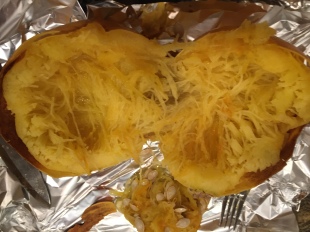 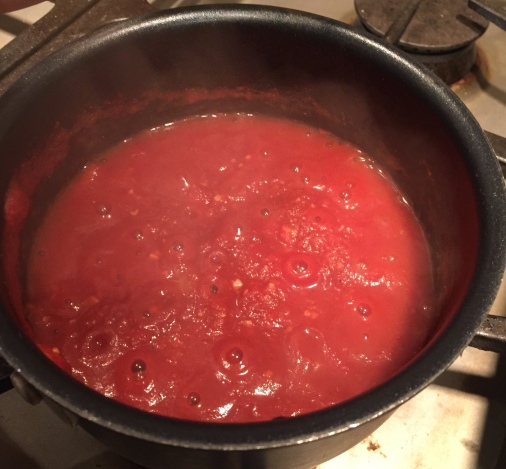 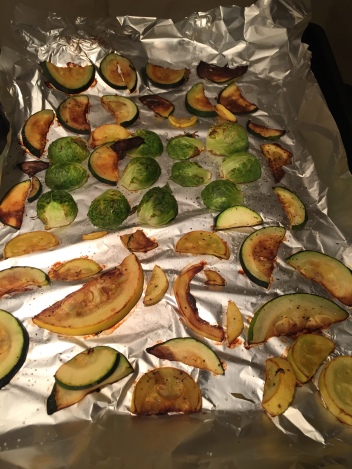 I wanted to make it a little heartier than just vegetables, so I decided to add a Hilary’s Spicy Veggie Breakfast Sausage, which is likewise both sweet (from dates) as well as spicy (from cayenne). I also switched up the roasted vegetables to what I had on hand, and this recipe can really work with any vegetables that you like. 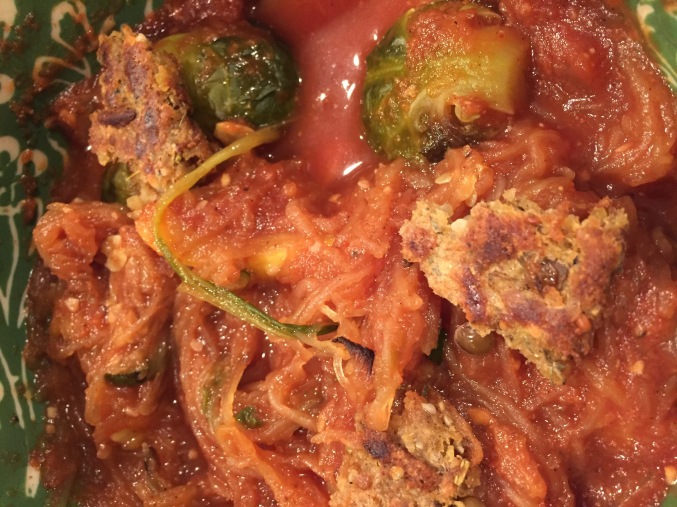 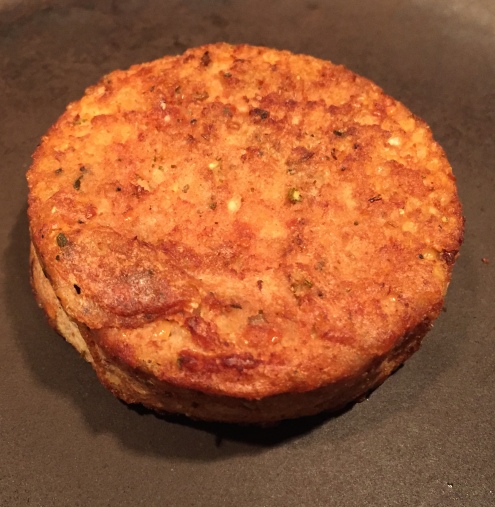 If you don’t have a gluten-free and vegan frozen sausage, I would imagine lentils, chickpeas or even falafel would be great alternatives. Hope you enjoy your versions as much as I did mine!

5 brussel sprouts, cut in half

Preheat oven to 400. Place whole spaghetti squash on metal baking sheet. Poke holes with fork as you would a potato. Once oven is preheated, bake the squash for an hour until it’s soft and the top is browned. Then remove from oven and let cool for at least 30 minutes until you can handle it without burning your hands.

As the squash cools, kick up your oven to 470 degrees. Line another baking sheet with aluminum foil and coat it with an oil spray of your choice. Arrange the zucchini, yellow squash and brussel sprouts on the sheet. Season with salt and pepper and spray with oil. Roast in the oven for 25-30 minutes depending on how thick your vegetables are sliced. You want them brown and crispy.

While the vegetables roast, add tomato sauce, onion, garlic, Baharat seasoning and red wine vinegar to a small sauce pan. Bring to a low bubble on the stove and cover for 15 minutes stirring frequently. In another saute pan, add a quarter inch of water and bring to a boil. Add the shanghai, paprika, cumin and salt and pepper and cook until shanghai is tender. Make sure you still have some water left in the pan because the tomato sauce will be thick once it’s done cooking and you’ll need to thin it out with the extra liquid.

Combine the sauce with the shanghai. Then return to your cooled spaghetti squash. Cut the squash in half, remove the seeds and use a fork to remove the spaghetti strands. Add the squash (I only used 3/4 of mine because I got a lot out of it) and roasted vegetables, when they finish, cooking to the saute pan with the sauce mixture.

Decrease oven temperature to 350. Cover the saute pan loosely with aluminum foil. Bake for 20 minutes to let all the flavors come together. Let cool 10 minutes before serving. As it cools, fry up your veggie sausage.  Pour the squash mixture into a bowl, top with sausage and enjoy!