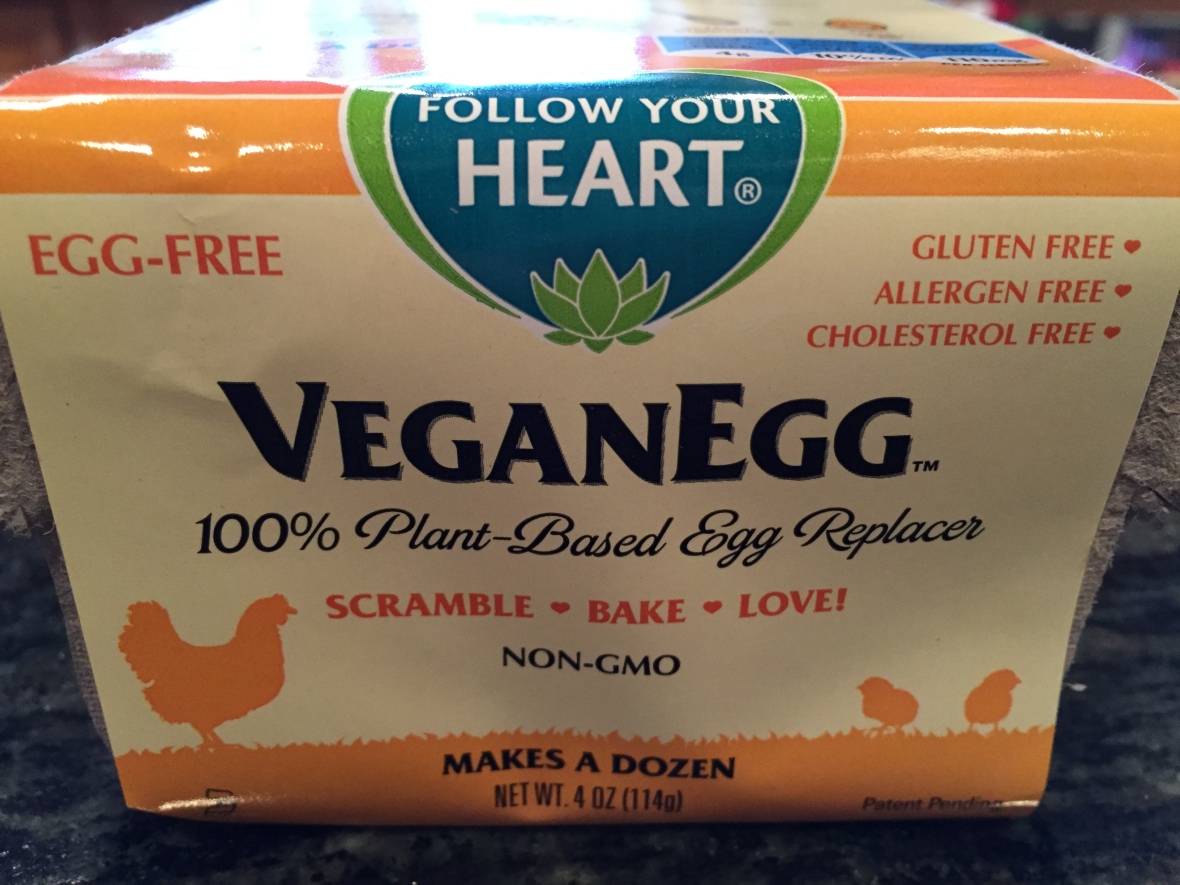 I must say the VeganEgg looks, tastes, smells and cooks up like a real egg to me, which made for one nice scramble.

When I first heard about Follow Your Heart‘s new VeganEgg I was skeptical for multiple reasons. I could not believe that they produced an egg substitute that not only was gluten  free and vegan, but also non-GMO and soy free. I did not think they could mimic egg’s “egginess”. Most of all, I really doubted this VeganEgg could actually taste good. I definitely did not expect it to smell like an egg or make a perfectly fluffy scramble.

Safe to say, I was blown away by this new product.

Let’s start with the basics. Follow Your Heart makes its plant-based egg replacer out of whole algal flour, whole algal protein, modified cellulose, cellulose, gellan gum, calcium lactate, carrageenan, nutritional yeast and black salt. Not sure what all of those things are, but according to the description on the box, algal is an ingredient derived from algae that contain all the essential amino acids and is a great source of dietary fiber. And speaking of the box, it’s a mini-egg carton. So cute!

Currently, the best, and only?, place I’ve been able to find it is on Amazon. When it comes in stock it sells out really quickly. Even though I had never tried it, I purchased four cartons (each is supposed to make 12 VeganEggs) because I knew it might be a long time before it would be available again. Very glad I did! It currently has 4 and a half stars, according to customers, based on 78 reviews in case you were wondering.

I decided to make a scramble with my first attempt with the VeganEgg. I started by sautéing mushroom, baby bok choy, green pepper and chive with chili powder seasoning, salt and pepper. Then I cleaned the skillet (I may not do this next time) and prepared the VeganEgg. To make one egg you add to tablespoons of the dry egg replacer to 1/2 cup of cold water. I used 3 tablespoons and 3/4 cups of water, which I chilled in the fridge. Then, following the directions, I used my hand blender to mix the egg powder with the water along with garlic powder, California chili powder and porcini mushroom salt.

I blended until it was smooth and sticky. If I had one complaint it would be that I felt I lost a lot of the egg mixture because it got stuck to the blender and wasn’t easily removed. Then I added it to my preheated skillet and used a spoon to scramble it for about 7 minutes, as the directions said, and then added my cooked veggies back in and cooked for another minute or two. Then I served it immediately.

I may not exactly remember what an egg tastes like, but as I said, it had a really good flavor to me. I think the addition of the other spices and salt helped a lot, too.

If you are looking for an allergen and cruelty-free egg replacer, I highly recommend this product.